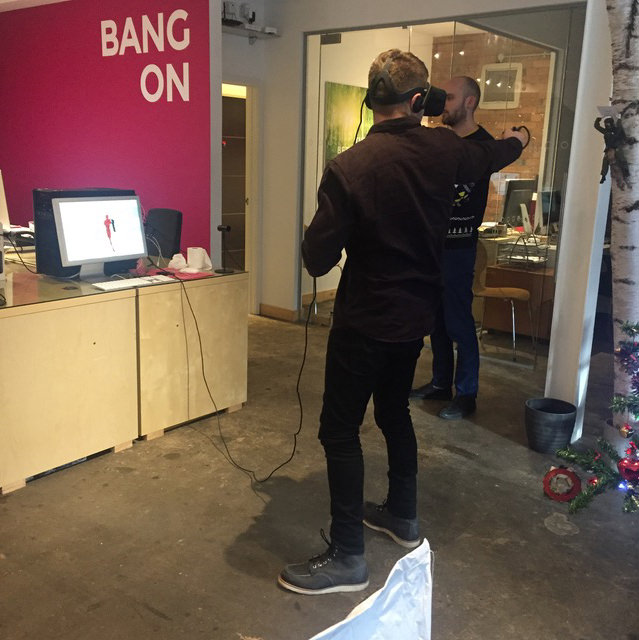 2016 was the year virtual reality became, well, a reality. You might have seen people wearing these oversized headsets, a futuristic gateway to a digital world that leaves you looking like a muppet to onlookers.

For the uninitiated, virtual reality headsets allow you to see a virtual world all around you, such as a completely immersive video game, or a 360° video. The current competitors for the headset crown are the HTC Vive, the Oculus Rift, and Playstation VR, all now complete with hand controllers for greater interactivity in the digital space.

Not just a toy

Our Technical Director Gareth is a long time advocate for virtual reality, and picked his Rift up on launch day. He’s since brought it to the office, and everyone has had a turn peering from the tops of digital buildings and dodging pixelated bullets. But can virtual reality make good on it’s promise of offering more than just escapism?

We think so. Developers have already released multiple artistic tools, such as Google’s Tilt Brush and Oculus Medium. These fully immersive drawing packages allow even the uninitiated to jump in and create fantastic sculptures from thin air.

Virtual reality is also delivering on the promise of telepresence, the ability for a user’s image to be transported anywhere in the world to interact with others – as if they were actually in the room with them.

What’s next for VR?

Microsoft has already taken steps into the related field of Augmented Reality, layering virtual elements (such as 3D models and images) on to the real world, with their in-development Microsoft HoloLens. But for technology to really make an impact, prices will need to drop and ease of use will inevitably improve.

A connected virtual world used to be the stuff of science fiction. How many films and shows and have you seen where the protagonist uses a pair of sci-fi goggles to access some futuristic Internet, where Amazon has a doorway your virtual avatar can walk through and browse?

The upcoming Spielberg film Ready Player One takes place in both the real world, and virtual world of the ‘Oasis’, a massive digital world where ‘real’ estate costs as much as any actual plot of land. The most popular website domain names are vied for in bidding wars reaching in to the millions of pounds.

Perhaps the virtual web will be the next step, after all.

VR as a tool

Let’s think about the applications for virtual reality – is it really that useful? There’s no denying, traditional inputs such as mouse and keyboard aren’t going anywhere. But VR opens the door to a new kind of workspace – the space that’s all around you.

Architects are already using VR to visualise large spaces that previously could only be imagined from a two-dimensional representation on a computer screen. Experts in medical, industrial and scientific sectors are using VR to train, and to explore information in new ways – imagine a surgeon being able to practice his or her skills in a variety of situations, all in a completely controlled setting. Astronomers can explore space and gain new insight, and professionals in industrial design – such as the automotive industry – can see the finished product, without the need to create expensive prototypes.

For more on the unique opportunities in interactivity that VR has to offer, read this excellent article on VR UX design over at uxdesign.cc.